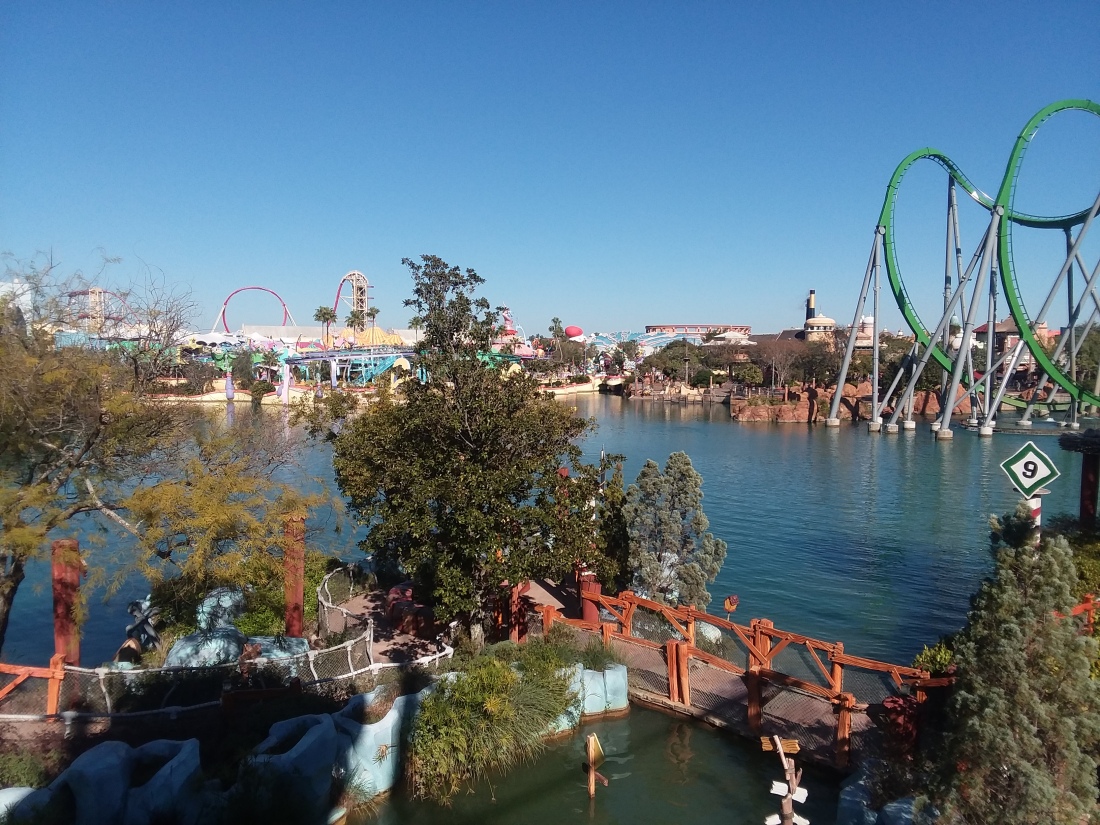 In an earlier entry found here I shared how I used SPG/Starwood points to land five nights in Orlando at a beautiful location during a holiday week for FREE saving Tall Family nearly $1200 on a fantastic trip in Theme Park Land.   I love the House of the Mouse but Tall Kid was interested in devoting the majority of his time to the Universal Parks on this particular trip and since it was a big part of his Christmas gift, I was willing to defer to him.

Let’s face it.  Nothing in Orlando is particularly inexpensive so putting in a little research time can end up saving considerable cash.  Previously I have bought park tickets only directly from the parks because of the nagging thoughts in my head.  “What if you make the effort to get the family all of the way to central Florida and then learn that those tickets you bought from another party aren’t even valid for entry?”  That’s the kind of anxiety my brain deals with, folks.  So I did some hand wringing and waited until just a couple of days before trip departure to decide whether I would take the risk of buying tickets from a distributor outside of Universal Studios.

I studied.  A lot.  And I gave the worrisome questions in my head great consideration.  I had heard of Undercover Tourist and had looked into tickets there for an earlier trip.  And I lost my courage.  But this time, a bit more seasoned and feeling like an Orlando veteran, I felt a little stronger.

Paying too much for something pains me to the core, but the realist in me knows that there are times it can’t be avoided.  I compared the at-the-moment numbers for a two park, park-to-park three day admission ticket to Universal’s parks.

Difference?  Just over $60.  The amount is not exactly Earth-shattering but the flip side is that, to keep it all in perspective, our clothes dryer, which lasted eighteen years, just died and I paid less than $800 to replace a large appliance that I expect to be in our home for at least a decade.  For most of us, $800 is a lot of money so adding in an extra $60 seemed excessive.

I couldn’t help myself.  I pressed the order button at the Undercover Tourist site.

And like the bang of a pistol at a starting line, the next step in anxiety started on cue.  I immediately reflected back to reviews which reported that Undercover Tourist had failed to send tickets via email, that customer service had to be contacted, that it was a long and tiresome battle with the phone representative, etc.  But within five minutes (probably fewer) the ordered tickets were sitting in my email box ready to be printed.  Maybe the reviewers were confused about where they had actually made the purchase?

Of course then I wondered what obstacles we may encounter on Tall Family’s initial visit to the Universal parks with the printed tickets.  Would I have to wait in a long line at customer service to exchange the emailed tickets for a different version?  What if the tickets didn’t scan properly once we arrived?

On our first day Tall Family lined up with everyone else to enter the turnstiles and guess what?  We scanned right in with exactly the piece of paper I had printed from the Undercover Tourist email.  There were no problems to be had and no exchange was necessary.  At all.  And I laughed at my anxious self for having ever been concerned.

Would I be willing to use Undercover Tourist for tickets again?  Based on this outstanding  experience, absolutely and without hesitation.   A few minutes of comparison is definitely worth a check but as always, do your homework and compare the numbers. Undercover Tourist (referral link) looks to offer regular “specials” for the major parks such as Disney and Universal which just may benefit your travel wallet as you hit the Orlando attractions.

Tall Mom is an adventurous mother of a teenager with a home base in North Carolina. She enjoys travels near and far with her family along with fun times at home and frugal living to support her wanderlust ways. In between she juggles a demanding and rewarding career in the education field. View all posts by Tall Mom Travels